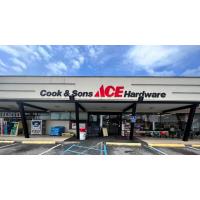 In 1958, S.L. Cook asked his son in law, Ray Osborne to work with him to open a hardware store in downtown Albertville.  At the time, Ray and Jo Osborne lived in Nashville, TN.  Ray’s first public employment was at a local hardware store at the age of 13 sweeping the floors and counting nails for inventory.  His second job was that he owned and operated a bicycle repair shop.  Later Ray became a salesperson for electrical supplies, calling on all the hardware stores in Nashville.  It could be said that Ray